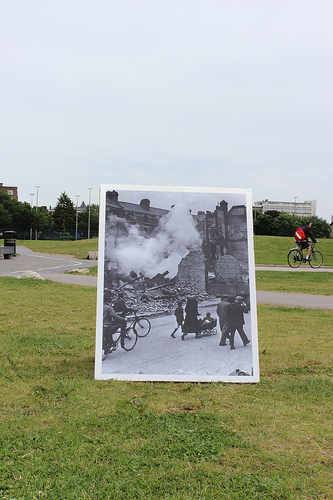 Standing in Shoreditch Park, it’s hard to comprehend the scale of destruction that set things in motion. Like many parks in east London, it’s a former WWII bomb site. A neighborhood of Victorian era houses flattened by the Blitz. Now, some seventy years later, it’s a well used and well equipped neighborhood park. Bordered, almost exclusively, by council owned social housing estates, the area has an established working class history. As part of this history, for nearly thirty years prior to becoming a park, the site was home to a neighbourhood of prefabricated homes.

Organized and funded by the British central government, the Temporary Housing Act of 1944, provided hundreds-of-thousands of people with their own prefabricated home. For many residents, their ‘prefab’ gave them their first day-to-day experience of living with indoor plumbing, modern appliances, and what middle class sensibilities would consider sufficient living space.

The Shoreditch Park Project emerged out of the basic impulse to orient oneself, to understand the social and material landscape of the neighbourhood, and the stories of how it has changed. In its current form, the park, offered a prime case study for exploring how social memory and local mythologies are reflected in the landscape. As a point of research, the Shoreditch Park Project has been thematically focused on this neighbourhood of prefab homes.

As factory built homes – the postwar prefabs, can be understood as an architectural-industrial expression of hope. The prefab program was a critical nexus point, of social policy, industrial urbanism, and design thinking that reshaped the domestic reality and daily lives of countless people. At the same time, the prefab housing program was part of a much wider campaign to rebuild the nation. From the National Health Service, to Universal Child Benefit, to state funded education, numerous programs, that act as instruments for social justice, emerged in the postwar years. 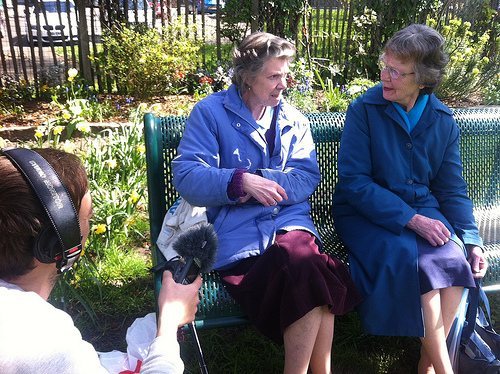 Shoreditch Park Project, conducting an interview in the park. Listening to memories of living in the prefabricated homes in Shoreditch Park.

How does one situate this, established historic narrative of the Temporary Housing Act, in relation to the less fixed mythologies of life in this specific neighborhood? When interviewing people about how the neighborhood has changed, you quickly find contradictions and anecdotal details that reveal competing interests and embedded power relations that have historically shaped the neighborhood and continue to inform the stories we tell ourselves about the place. Often the voice itself, acts as powerful cultural register, determining our relational understanding of class, race, gender, and region. With regard to the prefabs, and housing in general, one will quickly comes to realize that housing is always an issue, and that the critical problems the prefab program addressed are still present, in one way or another.

Working with a group of youth researchers, we’ve held six months of weekly workshops, anchored in a curriculum that mixes new media literacy with heritage and social documentation research. We’ve reviewed the local council archives, hosted tea party gatherings, collected man-on-the-street style interviews, and gone on field trips to postwar prefabs that are still in use. In total we’ve conducted over 60 oral history interviews. The project has culminated in the production of an audio visual collection, website, park installation, and short sound piece. In this way, the project is a research/educationally driven interpretive project, that actively relocates the notion of cultural heritage from a noun to a verb, from a fixed object to an inherently collaborative and performative act.