Tea Parties
Share your memories of life in Hoxton.

Justin O’Shaughnessy is the culture and arts producer at the Shoreditch Trust. As written on their website the “Shoreditch Trust aims to tackle inequality and exclusion across deprived and disadvantaged neighbourhoods with a particular concentration on activity in Shoreditch. By focussing on the root causes of inequality we aim to enable individuals, families and communities improve their mental, physical and social wellbeing.”

Dustin: Can you tell us about the Shoreditch Trust and your position there?

Justin: I’ve been running the Shoreditch Festival for the Shoreditch Trust for the last five years or so. The Shoreditch Trust was started in 2000 as part of the New Deal for Communities programme, set up by New Labour. There were 39 of the them across the country in areas of multiple deprivation. The original brief for all of them, was to look at housing, employment, education, and health issues over a ten year period. Each organization had about 50 million pounds to spend, which sounds like a huge amount of money, but when you look at the constituency in which we were working, the housing stock alone required a window refurbishment that cost something like 125 million, so that gives you a scale to things. We’re quite a large organization, with a long list of agendas: housing, health, job training, etc. We’re still running a lot of those programs, but central government funding stopped in March 2010. There have been a number of successes from that period, but we believe there is still work to be done. We have a number of health workers out in the community, running antenatal session, working with issues of mental health, and we do a lot around health eating and growing. We run a number of community kitchens, and we are just now running a program called Estate to Plate across Hackney, looking at how to encourage people to grow their own produce and eat more healthily. We also have a small property portfolio, which helps us to bring in income; we use these as managed workspaces, which gives us contact with other organizations in the area.

I have the privilege of the delivering the cultural offer. The cultural offer has been very helpful, even though we’re not an arts organization, as it helps us start discussions with people that we otherwise might not talk to. So the festival has acted in many ways as an annual focal point, or glue, for the organization internally, giving us moment to say we’re here, we’re doing something. But it’s also allowed us work with a range of other partners. And since taking over the festival, one of my strategies has been to ask local organizations, how can the festival serve you? What can I do to ensure you can participate and use the festival to both raise awareness of your organization and to showcase your work. The festival used to happen in Shoreditch Park, as part of a wider public works and refurbishment programme; the park wasn’t always the safest place to go. Part of the strategy for holding the festival in the park, was in the belief that ‘eyes on street’ make for a safer place, more people using this park ensures it’s better looked after and better serves the communities that use it. By 2010 we had become a very large festival, a three-day event in the park, with the Royal Philharmonic Orchestra and fireworks, and two more days of activity. By then, the park was refurbished and many more people were using it and other festivals were taking place there, so it many ways it was a case of saying our job is done there, where else can we look. And part of the strategy of moving the festival to the Regent’s Canal in 2010 was of similar thinking: the towpath didn’t always feel like the safest of places, there was a huge amount of development going on around the canal – you might say it was almost a privatization of space with all the building going on – so we wanted people to come to the towpath, to own the area, explore parts of their neighborhood they might not otherwise go to. It was a strategy to say this is your and it’s open to everyone.

I think Hoxton Street still has to be the heart of our focus, it’s the heart of the community we are suppose to serve, and it acts as a backbone to the area. An area that still has a great need, in regard to all of the kind of delivery paths we have. Particularly as Hackney changes very quickly all around us – there is an ongoing march of gentrification that can often lead to a displacement effect. The gentrification takes over pockets and actually excludes people: it’s not the most inclusive process often. So offering high quality, free, cultural activities allows us to ensure a cultural entitlement for all despite economic barriers, compared to the festivals that are 200 pounds a ticket.

Dustin: Can you talk about what we were talking earlier before the interview, about shifting from a once a year event, to ongoing programming. Or moving from producing a moment of celebration to cultivating sustained conversations and partnerships?

Justin: While doing a Masters in Sociology at Goldsmiths I wrote about the difficulty of using arts and cultural practice as part of regeneration agendas. My line was that they’re a kind of opiate that keeps people happy, but doesn’t really empower them in any real way. There’s quite a left line there, following theorists like Nancy Fraser. But ironically having written that thesis – suggesting that cultural practices were weak when used within the regeneration process – I found myself working at a cultural organization called Rich Mix (in Bethnal Green), a cultural regeneration project, and then I came to Shoreditch Trust working as part of regeneration agendas. So my view has shifted slightly, though I think there are constant issues and constant challenges. We need to question what we do, year on year, month on month, to ask why are we doing this? Is it relevant to our constituents? Is this a useful thing to do? I’m not very good at the ‘art for art’s sake’ approach, I want it to have an agency within its context and place.

I think it’s important to say that Shoreditch Trust isn’t an arts organization. So the cultural offer we have is just one of the tools in the toolkit we have. We’re a charity that is there to serve a very specific community in a small area. But often the models we have piloted here, are useful elsewhere. In terms of community kitchens and healthy eating programmes, for instance, we are running a number across the borough. While in 2011 and previously, we’ve been the largest free festival in Hackney, I think that parachuting in a festival for a weekend or a week, in the summer, once a year, isn’t the most useful way engendering a conversation around the arts, or indeed entitlement to artistic practices and potential change and the opening up of opportunities. So in 2011 we started running a Creative Mentoring project, where we had ten young people from Hackney and we embedded them with six creative organizations and artists in the area, over a six-month period. It was a very successful project for both the young people and the organizations involved, resulting in an exhibition in a found space just off the back of Hoxton Street. And I think we also came to realize that being able to sustain that project over six months had huge value. Having a sustained in depth conversation with the participants about the process and product, and about the experience over six months, was in many ways far more fulfilling and useful then brushing up against 30,000 people in the park for a weekend. 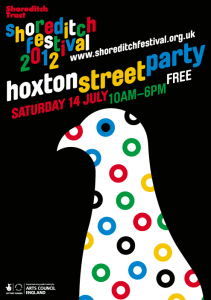 I’ve been on the festival now for five years and we have built partnerships with over 65 local organizations, and I think everybody realizes that sustaining that conversation with our constituents throughout the year is the most important way to go.  So we’re looking at how we can stretch the resources we have, and how we can use them more efficiently, and how we can put very humble small initiatives into place, while working in partnership with other cultural organizations and artists in the area. How do we weave the cultural conversation, throughout the year, and through different projects we’re doing? For instance, I was talking with a local gallery about a sexual health project, that we could link up with our antenatal care unit. There are common links between what this gallery is trying to do, and what our care unit is doing, how can we overlap them so there is a benefit to both projects?

We know visual arts tend to deify the artist – the individual – so that commercial galleries can sell the work. And in some ways, that sense of solo authorship that also runs within current celebrity culture suggests that individuals are important, rather then communities. The festival format can, in some respects, fall into the same trap: you put on a headline act and people come to consume. So we’ve tried to undermine that, by working with the local schools to open slots for young bands to play on the same stage and bill without the hierarchy of the headliner. So it becomes a more communal space, rather then something that is just consumed and watched from a distance. The festival is only useful to me because it is about the constituents and the sum of its parts.

Likewise when we did the project in Hoxton Street, the issue there was saying, the market isn’t doing as well as it could, while other markets in the borough are burgeoning. But actually there is a huge amount of cultural activity and thought going on in the area, from the work that you’re doing with PEER gallery, to the Ministry of Stories, Hoxton Hall, to A Brooks gallery, with the Retz collective at the top of the street, with dance companies like Ebonessence, the local Tae Kwondo group, the creative mentoring program, all the pubs; there are manifold events, activities, interventions going on already. So by talking with those people, we used the festival as a way of bringing everyone together to show their wares and come into the street on one day, to make people realize how much there is there. So it wasn’t about any headliners, it was literally about getting people out onto the street so we could have conversations. Our cultural program has to be a route to having conversations with people, using it where we can to decrease isolation and increase access and opportunities.

You can learn more about the Shoreditch Trust and the various programs at: www.shoreditchtrust.org.uk